Twice in One Month!?!

I know, I know, it's very strange. I'm writing again and it hasn't even been six months or a year. Part of my resolutions for the new year were to tat and write more.

Well, I have started work on the Let's Tat a Brussels Monument in Pink for Women's Rights project. I've only managed a test tat right now (had a busy couple of weeks) but I have the shuttles and thread ready to get down to business for the real thing. 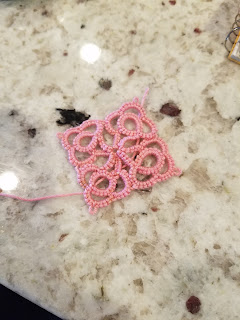 I've also started working on an Ice Drop, pattern by Lace Lovin' Librarian. I should have read all of the instructions first, but I managed to struggle through and produced this: 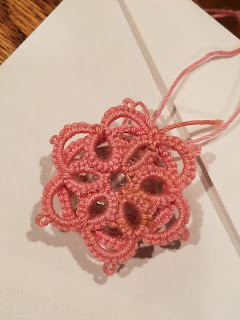 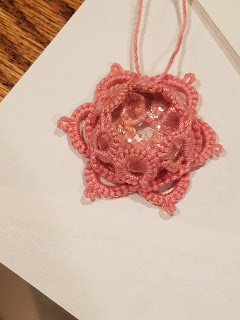 I have been offered the opportunity to exhibit tatting again at the Irish American Heritage Center in Chicago. This time it is during their St. Patrick's Day celebrations. I suspect I'll be making quite few of the obligatory green earrings to have on hand that day, but I'll also work up some other more interesting items. I began a doily (I keep it at the Center) that I hope to have finished in time. It wants aggressive blocking right now, but I'm about three rounds out of 4. The first time I made it, I used green and white thread; it turned out okay. I've decided to go all white for this attempt. It's the Clover Leaf Doily from an old issue of A Needle Pulling Thread magazine. 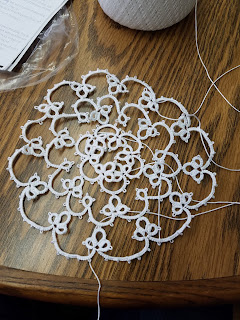 If I can manage to make a more successful Ice Drop (and tat a few of the Brussels squares), I feel that I will have achieved my goal of learning one new pattern a month this year. Does this count as two patterns in January, or do I get to slide on February off of this? Either way, it's a start. I tend to make more than just one of everything so getting a new pattern in here and there will only add to my repertoire!

I was hoping to jury in to a new market here in Illinois in May (the market isn't new, just my being there). Had the application ready to go. Then I realized that it conflicted with a 5k I am running with my daughter. I'll not be telling her about it because she would insist that I do the market instead. She is a sweet child and very supportive. I think I'll be free for the September version, fingers crossed I get in.

I'm off until next time.